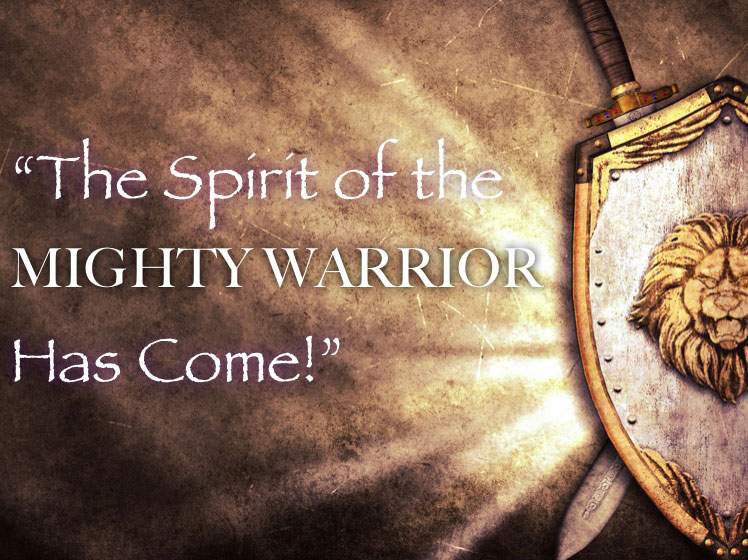 We’ve just come away from our annual HIM meetings with our Apostolic team leaders. We’re so blessed to be a part of such an amazing team! After hearing the testimonies of our International leaders we realize how blessed we are to live in America! The world is in such turmoil! We could especially see it after hearing testimonies about Egypt, Russia and India. But even with all the persecution going on in these countries our International Apostolic leaders and their churches are standing their ground and not giving in to fear & intimidation!

Lately I have been dreaming about those that are being persecuted and I’ve actually found myself embodied in the persecuted and intimidated and feeling their agony and pain until I heard the Lord say to me “Overcomers are Rising up All Around the Earth.”

The 4th Wave, The Spirit of the Mighty Warrior has Come

Cindy Jacobs was with us last Thursday night at the 20th Anniversary Party for HIM and she prophesied that the 4th Wave of the church had begun, a reformation wave! That very same night I saw in a dream the Spirit of the overcomer being poured out! Waves of courage and faith like we haven’t seem in some time began pouring into the church!

And I heard the Lord say, “The Spirit of the mighty warrior has come! And even though the enemy has come in like a flood, I am raising up a standard against him, and you, my people, are that standard. You are called to be the banner of victory that I wave in the face of the enemy! It’s my love that will carry you to victory! For you are my beautiful bride that I will show off to the nations for I am infusing you with my love. And the power of this love will release many from out of the dungeons of despair that hold them captive to fear and doubt. For an army is being assembled; mighty men and women of faith that will not be afraid of the battle, but will stand courageously for righteousness and truth in the midst of it!”

And then suddenly I saw a bright light flooding a battlefield. And I realized that the light was the Spirit of Revelation being released to reveal the power of His love! And it was His love that was pushing back the darkness and releasing His glory! And I heard Him say, “These are the days of encounter and my people will encounter me and experience a a greater revelation of who I am. And I will flood their hearts with courage and with strategy to defeat the enemy.” And then I saw waves of His glory and power rolling over them washing away the fears of the past and leaving in its wake a bright hope for the future!

And then suddenly I saw even more light being released. There was now so much light that the people were beginning to see the warring angels surrounding them. And great faith and confidence in the Lord rose up in them. And that was when the Lord of angel armies began releasing the Spirit of the Mighty warrior which in turn released a Spirit of peace and calm. And I heard the scripture, “I have left you with the gift of peace-My peace. Not the kind of fragile peace given by the world, but My perfect peace, so that you will not yield to fear or be troubled in your heart, but instead, you will be courageous! For I am sufficient and always enough. For I am your sufficiency for all things!”

I LOVE YOU, LORD

“Lord, I passionately love you! I want to embrace you, for now you’ve become my Power! You’re as real to me as bedrock beneath my feet, like a castle on a cliff, my forever firm Fortress, my Mountain of hiding, my Pathway of escape, my Tower of rescue where none can reach me. My secret Strength and Shield around me, you are Salvation’s Ray of Brightness shining on the hillside, always the Champion of my cause. So all I need to do is to call to you, singing to you, the praiseworthy God. And when I do, I’m safe and sound in you.

God, all at once, you turned on a floodlight for me! You are the revelation light in my darkness, and in your brightness I can see the path ahead. With you as my strength I can crush an enemy horde advancing through every stronghold that stands in front of me. 0h what a God you are! Your path for me has been perfect! All your promises have proven true. What a secure shelter for all those who turn to hide themselves in you! You are the wrap-around God giving grace to me. Could there be any other god like you? You are the only God to be worshiped,
for there is not a more secure foundation to build my life upon than you.

You have wrapped me in power, and now you’ve shared with me your perfection. Through you I ascend to the highest peaks of your glory to stand in the heavenly places, strong and secure in you. You’ve trained me with the weapons of warfare-worship; now I’ll descend down into battle with power to chase and conquer my foes. You empower me for victory with your wrap-around presence. Your power within makes me strong to subdue, and by stooping down in gentleness you strengthened me and made me great!

The Almighty is alive and conquers all! Praise is lifted high to the unshakable God! Towering over all, my Savior-God is worthy to be praised!”