A Year of Miracles! – Newsletter October 2016 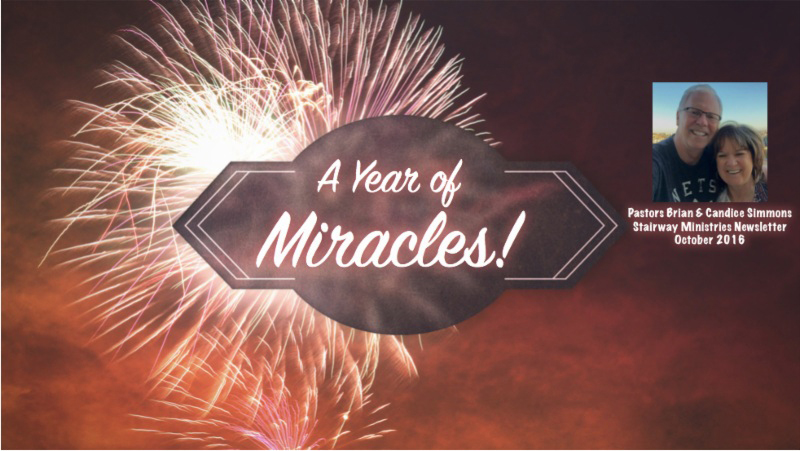 “A year of supernatural grace and fulfillment

A year of miracles!”

We want to thank all of you that prayed with us through my mom’s recent illness and death. What would we do without all your prayers and kind messages. Thank you so much!

Since her passing we’ve been caring for my 90-year-old father and helping him to adjust during his time of grieving. Other things have had to take a backseat (like our last letter). We had to let last month pass by, but now we’re back on track again! Thank you for your patience!

As most of you know every year on Rosh Hashana (the beginning of another new year on the Jewish calendar) I ask the Lord for words about the coming year. Here’s a compilation of dreams, visions and words that the Lord spoke to me that night.

A year of supernatural grace and fulfillment! (Year 5777 on the Jewish Calendar)

1. Glory– This is the year of more glory! We have seen the manifest glory coming more and more in our corporate gatherings, but now we will begin to see more of the manifestation of glory going out with us to the streets, to our homes, schools, workplace and it be released outside the four walls of the church.

2. Oil- This is the year of a miracle anointing being poured out. The Lord spoke to me last month and asked me, “Do you believe in miracles?” Then the next day I heard Him say, “Would you like to see a miracle?” Many believers that have only watched from the sidelines will begin to move with a miracle anointing. On Rosh Hashana I saw in a dream oil being poured out to those who would accept it. I saw people who held out their hands as the Father filled them with oil from heaven.

3. Favor– Many that have been passed over will now be ushered forward into their destiny. And like David in the field and Joseph in the dungeon God will highlight them, bring them out and raise them up.

4. Forgiveness– I heard the Lord say, “Don’t let the bedbugs bite”- Some deep-seated relational issues are going to be put to rest. Things that were once important will no longer be a point of division. Healing is coming to many in the the body. We will begin to see long held rifts dissolved by the love of Christ. Forgiveness will flow like a river from the throne. The waters of forgiveness will go over the heads of people until they realize that they will either sink or swim.

6. Champions arising- Many ministers and Christians who have given up on church and have lost hope of ever being used by God again will join in and take up their positions in the body of Christ. Many had become disheartened and left the church for one reason or another, but this year many are going to hear the voice of the Lord calling them back. They will find their hope renewed in the Lord and His people. And God will raise them up as His Champions.

7. Young Apostles stepping forward- I dreamed of anointed young men and women taking up the mantel of the Apostle and building large networks around the world.

We need to rejoice! And again I say rejoice! It’s gonna be a good year for the body of Christ! 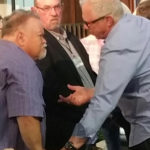 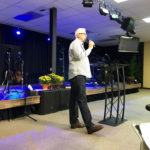 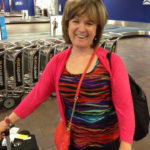 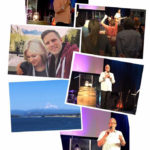 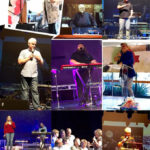 Ephesians has been LAUNCHED online and Philippians up and running! Check it out at the website: www.tptbibleschool.com.

We’re happy to report that we’ve just finished 1st and 2nd Thessalonians and have turned them into the publisher along with 1st, 2nd, 3rd John and Jude. Right now we’re working on Titus. It’s so exciting to be so close to finishing the New Testament! We believe that we’re on course to complete the entire New Testament with Psalms, Proverbs and the Song of Songs by 2017

A Thank you to our Partners

If you’re a partner we’ll automatically send you each new book of the translation (This does not include the other books, only the translation.) as it comes out as our gift to you! You can also donate to our travels overseas where we affect the nations! We may be in Israel, our first trip of the year, by the time you receive this letter! We have another exciting year of travel! We appreciate all the ways that you stand with us to get the job done!

You can become one of our Partner’s by making a monthly donation of $30, $50, $100 or you can make a onetime tax-deductible gift by credit card on one of the links below for easy access.